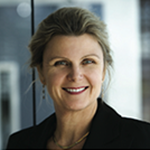 An interview with Lorna Davis, Chief Manifesto Catalyst at Danone

Lorna Davis: It’s about finding a credible mechanism for transforming a global business that is a marriage of purpose and profit. So B Corporation status would be – if you like my simple language – the ‘Fair Trade of Business’; somebody could look at a company and with a relatively easy grasp say that is a ‘good business’. It needs to be externally motivated and externally credited, with both a legal and a community purpose.

AvS: Why is this so important?

Lorna Davis: B Lab, the non-profit organisation who initiated this idea in 2006, started off from the “try-to-change-the-world” perspective. And if you look at the 220 questions in the ‘B Impact’ questionnaire that gets you accredited, they tend to be very small company focused. So, for example, you get a lot of points for local sourcing. However, when you are a big company, often you are globally sourcing and that has all sorts of benefits. Take Evian water. The carbon footprint of a bottle getting from Evian to Shanghai on a train and a ship is smaller than the carbon footprint of driving it in a truck to Brussels. We don’t think that global vs. local is necessarily the only question. So what became clear to us is that B Corporation thinking is very interesting but to get this movement to build scale you are going to need big companies to get on board. And ultimately, consumers will say: “I want to buy from companies that are doing good as well as making money.”

AvS: For Danone, this is the continuation of a long journey?

Lorna Davis: Indeed, yes. We have always been purpose driven in some ways. In 1917, when Daniel Carasso started this business, yoghurt was seen as very good for your stomach and was sold in pharmacies. Then Antoine Riboud took that on, saying publicly in 1972 that the responsibility of a company does not end at the factory gate, and launching what he called the ‘Double Project’. Frank Riboud took it to another level again in the 90’s, by creating the mission “to bring health through food to as many people as possible”. The organisation then sold off bits of the business that were not consistent with that and bought into more healthy products, like Numico infant nutrition. In the early 2000´s we started a system, a mechanism in the company called the “Danone Way”: a training, accreditation and auditing system inside the company to ensure our people around the world are doing their job in an ethical way. In 2006, we launched ‘Danone Communities’, creating a partnership with Muhammad Yunus in Bangladesh, to launch nine social businesses designed to change the world, each in its own little way. Its only purpose is to make social change, not to make money. Then in 2009, we created an ‘Ecosysteme’ Fund which received a hundred million dollars from the shareholders, and we said to all of the people in the Danone business, we want you to create meaningful projects that are good for the world in your local environment.

AvS: If you look into the future, transforming the core of the Danone business – what’s your sense of how costly this will be, how difficult, and how long it might take?

Lorna Davis: The answer to the question is: I don’t know. The question implies that this is an either-or-game, which it in fact has been in the past.

AvS: Is it still an either-or game today or is it possible to do both?

Lorna Davis: We think ultimately that there is no trade-off. But the question is time. How does that work in a week, a quarter, a month, a year, a cycle? And that’s where you need maturity, you need an understanding of nuances, and where we think you see a magical combination happening. For example, in Romania, our country GM partnered together with a local NGO and with the Red Cross, to promote natural birth and breast feeding. The Romanian founder of the NGO learned a huge amount from our business people about how to get things done, and our GM learned about how to make a real difference in the community. There are many people in communities who are trying to do real good, and then there are people in business who are really good at achieving results. And so if you put together the desire to do good and add that to the ability to really get stuff done, you get this magical combination. 15 or 20 years ago, people would speak about it but then they wouldn’t deliver it. But as the issues of the world get bigger and bigger, as people realise that the system is not sustainable, as people realise that there is a better way, they say: “actually, I am going to put my money on what I believe in.”

AvS: Does this resonate more with young audiences only, or is it not that clear cut?

Lorna Davis: Good question! It is complicated. For young people it is, in a way, not even news. Like that’s the way the world is. But what I notice is that we are all complicated. People have this interesting internal dynamic around their desire for money, power, and success. Particularly people who have young families and are early on in their careers. They have this internal tension around making a difference versus climbing the ladder, irrespective of whether the ladder is against the right wall. We haven’t really seen a pattern yet except to say there is a bunch of younger people that are very clear, they are in. There is a bunch of people on the sides, for example the people who work in Ecosystemes or Danone Communities, who are clearly in and who are willing to trade off more material ambitions. And then it gets more complex.

AvS: What kind of resistance do you encounter and how do you deal with that?

Lorna Davis: I love the concept that there are only two realities in life, either love or fear. And by definition, if somebody is coming at you with anything that isn’t love, it is fear. So the question is: what are they afraid of? And so resistance is just fear. And it’s understandable – we are all terrified; if we weren’t terrified we wouldn’t be awake! Life can be scary. So empathy is really important. I never met anyone who was purely nasty; people are just frightened. Empathy is therefore important to overcome initial resistance. Credibility is also important; if you don’t know what you are talking about, then why should anybody listen to you? And then you have to have logic. If you think that someone’s rationale doesn’t make any sense, no matter how much empathy they show or how much structural power they have, people aren’t going to listen. So a combination of empathy, credibility and logic is needed. But the biggest chunk of it, in terrifying times like these, is empathy, because people are afraid.

AvS: If you think about the challenges you are facing, what keeps you awake at night?

Lorna Davis: It’s the balance between disruption and stability. Big corporations are generally structured around a manufacturing process; they are designed to organise, to create discipline in activities, to allocate tasks in a chain. Effectively what we are trying to do now is move from this ‘mechanical’ system to an ‘organic’ system where we operate more intuitively and are much more porous to the outside world, much more connected with NGO’s, governments and communities. As you are moving from one system to another, you need to disrupt the first system enough so that people understand the old rules don’t exist anymore. But at the same time replace that mechanism with another system, one that is more fluid, more natural, and more organic. That is not easy to do in real time.

AvS: Are employees getting actively involved?

Lorna Davis: When we launched the Danone B Corp manifesto, we asked employees: “if we would live this manifesto, what would that look like?” And we offered a prize for the top 21 ideas. Unbelievable ideas came in, mostly from the younger people in the company. One recent idea was to run a ‘Manifestival’, an open air festival where you combine a mixture of music, messages from inspiring young people who are trying to change the world, and demonstrations of socially valuable projects. The idea is brilliant. But then the question is: “how are we going to find a way to bring that idea to reality?” We will need to take resources from somewhere in the organisation, find the money, put a team together. And that is just one example. There are hundreds of ideas being generated and each one is an opportunity to learn a new way of communicating, to live a passion.

AvS: How do you try to prioritise from all the ideas coming in – do you have a matrix or do you go on intuition?

Lorna Davis: It’s a combination. First of all, it is good crowd sourcing technology, so if a lot of people think it’s a good idea, than probably it is a good idea. For example, one of the biggest ideas is that every ‘Danoner’ should be an ambassador for every division of the company. At the moment, we might have someone in the Water division whose sister is pregnant but he doesn’t know anything about babies, even though Danone has a whole Infant Nutrition division. So the question is how do employees access the available knowledge? How do we get every single one of the 104,000 Danoners into a position where they know what they need to know about the rest of the company, and are able to access expertise and resources to make meaningful contributions outside the group? It is a big idea; it is complicated but the prize is significant. We are going after those ideas because there you’ve got leverage. It is like a matrix: size-of-prize / degree-of-difficulty. There are some ideas out there which are big and difficult. Equally, there are some ideas that are smaller scale but still important which I’m encouraging at a local level. One young employee came up with the fantastic idea for a recycled container that uses solar energy to clean water, for example in Africa. His idea is being funded by his boss directly. He is working on prototypes, and then hopefully we can scale it up.

AvS: If a general manager were to come up with a brilliant business idea in the sense of being commercially profitable, but which ran contrary to where the company is trying to go in terms of ethics, what would happen then?

Lorna Davis: It is a great question; it is one of the reasons we are so interested in the external community. We are not a very authoritarian company and we are much more interested in raising the internal awareness of our people. But when one makes a commitment to the outside world you then have to think very carefully before you break it. So I think that the external connections are coming now full circle to B Corp. When you are part of a community that wants to make a difference in the world and you have decided that you are going to do something for the greater good – let us assume that you are going to change to a new kind of ethically sourced packaging. But the costs of that packaging goes up and you could easily go back to a non-ethically sourced packaging that is cheaper, and maybe nobody would notice. But if you are part of the community, you are going to think about these questions differently.

AvS: Lorna Davis, thank you very much for your insights!

The Benefit Corporation
Scroll to top