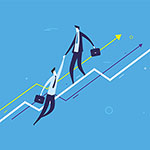 Onboarding is an absolute must to ensure a smooth transition

by Carolyn Lutz and Philipp Fleischmann

Let’s imagine you are a shareholder of a large and successful diversified family business, operating globally with several fully owned companies, joint ventures, and participations and other businesses. The time had come for a CEO succession, there was nobody from within the family that was qualified to take over. You hired an executive search firm, you found your candidate, everyone agreed he is the one, you negotiated, he was hired. The search firm strongly suggested that an onboarding and integration program would be very helpful to help this new CEO navigate the family and firm culture and all the hidden traps he could fall into as he attempts to make his mark and get some early wins. You refused, thinking you and your team would succeed in doing the onboarding and integration on your own. Now, 18 months later, the new CEO is out, and you are back at square one. What went wrong, and how can this be avoided in future?

First, some data from different sources around the world of onboarding and integration:

Most firms do well with the administrative formalities of onboarding: making sure the IT needs are organized, business cards are printed, paperwork is filled out, and compliance is organized. However, what is often missing is a clear and benevolent immersion into the unwritten rules of the company, which can lead to the biggest faux pas in terms of derailing an otherwise well-suited candidate. After all, privately held organizations tend to keep their employees a long time; their culture evolves differently and more slowly than a publicly traded firm which will have more heterogenous talent and probably more ‘fresh blood’ from outside the organization. Family-controlled company culture can be overly influenced by outsize personalities; official reporting lines may belie the actual power and influence of certain individuals. Candidates who are ‘best in class’ but who have come out of a publicly traded organization, or even a different family-controlled business with a different culture, can quickly fall foul of ‘the way things are done here’ if they are not guided even before their first day on the job.

Tips for the organization

Tips for the hired candidate

Know yourself – your style, preferences, values and motivations – and how these fit with the organization and team culture.