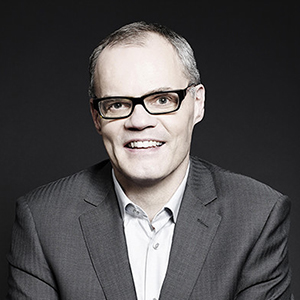 An interview with Frits van Paasschen, author of “The Disruptors’ Feast

Andreas von Specht: Disruption is everywhere and it is often start-ups or industry outsiders who challenge the establishment with new ideas. What is your advice for company leaders who are suddenly faced with these ever faster changes?

Frits van Paasschen: Many senior executives who have been successfully managing businesses over the past few decades are finding that the requirements for success have changed significantly – for themselves and for their organisation. I would primarily advise them to be the guiding light for the company by creating a global mind-set, understanding what is happening outside the company and translating that into necessary changes. Especially public companies are too focused on KPIs, hitting quarterly earnings and meeting the parameters of success that have been defined. As a result, it is very easy to miss the forest for the trees. CEOs and leaders constantly need to ask themselves: are the measures that define the success of our company still relevant, or are we optimising ourselves for a world that is increasingly obsolete? That is why the outside perspective is so important – not just with regard to technology, but also to other cultures and markets around the world.

How do you best obtain that outside perspective?

By installing an advisory board of “Millennials”, for example, consisting of people from both within and outside the organisation. Or by having conversations and close relationships with venture capitalists who know a lot about the start-up businesses that could become relevant. “Hackathons” can also be quite successful – putting together a contest among teams to come up with new digital solutions within a 24-hour period of time. These are all very useful ways to get an outside perspective and create a different way of thinking.

You obtained that outside perspective by e.g. relocating the corporate HQ of the hotel group Starwood to China and Dubai for a certain time. How did you sell that idea to your staff?

By asking them if there was any reason why we should not do it. That was the beginning of a real dialogue around creating a global mind-set and understanding that instead of enforcing structures from the centre, we needed to serve our regional executives if we wanted to be successful in new markets.

Being successful in new markets to some extent also depends on political developments – some of which seem to go rather backwards today.

Many recent political results – for example the US presidential election or Brexit – were surprising and troubling to us. But we should learn to expect to be surprised when complicated systems are changing rapidly. The rise of populism that we’ve seen in many European countries in the last year is another example. And that is actually very much connected with the topic of disruption: the driving force behind it is an increasing number of disenfranchised voters, whose jobs and livelihoods are either being threatened or taken away by globalisation and the spread of technology.

Are there people at the losing end of a rapidly changing global economy?

There are always winners and losers in times of change and disruption. The competitive environment for labour has become a global one, jobs can easily be moved somewhere else. And the pace of change by far exceeds the capacity of labour forces to retrain and redeploy. Unfortunately, people have a strong tendency to look for someone to blame, and it is much easier to blame somebody on the other side of the border than to look at your own nation or your own lack of relevant skills for a changing marketplace.

Have these changes in the global supply of labour led to a new “war for talent” among employers?

I think the “war for talent” has existed for some time, but it is only intensified by what is happening. Across every industry, companies are looking for people who are digitally savvy, understand social media and are able to integrate technology into existing ways of doing business. Having a global perspective and seeing across functions has become more important in today’s strongly connected world. Traditionally, companies used to recruit people with specific skills or a specific industry background. Today, companies are increasingly looking for the same kind of people that incorporate the above mentioned skills.

What would organisations need to do differently today in order to successfully seek top talent around the world?

In the past, companies spent more time recruiting talent to where they were located. Now they have to see talent as a resource that has localisation: they have to look at dynamic cities, places that are hot-beds for the creative class – places where people with the type of profile described above are much more likely to be found. Those locations – whether that is in Brooklyn, Berlin, London or Amsterdam – need to be used to recruit and retain people who live in an environment where they feel comfortable.

How do top executive search firms around the world have to adapt to these changes in order to stay relevant for their clients?

With the emergence of LinkedIn and other networks, the executive search business is experiencing its own form of digital disruption. With these advancing abilities to recruit, more and more companies are moving in-house with their talent management. But many companies are still defining the profile of their new senior executives narrowly and in traditional terms – and often not realizing that their need for new personnel might result from the need for different skills. As an advisor, you have to challenge the ideas of your clients and draw their attention to these new needs. Senior executives might be from outside the industry, but they might be the right person for the job if they are able to ask uncomfortable questions that prepare the company for a disruptive future, like: What do you believe are the biggest threats to your company today? What do you think digital disruption will look like? How do you plan on coping with that? How is your team set up to lead change? Do you have someone who can be an advocate for making changes that go from central planning and skilled manufacturing to personalisation and consumer dialogue?

Many of our clients are family-owned companies. Are they facing the same challenges as public companies in disruptive times?

Successful organisations have to be able to understand as quickly as possible what is changing – and be a force for change, not only reacting to what is happening. In comparison to family companies, public companies are much more responsive to an investor community, strongly focused on short-term earnings and therefore sometimes blind for the nuances of change. The dynamic in family companies can cut both ways: focusing on tradition and continuity can be a barrier for change, but it can also be a way of staying focused on stewardship and sustainability in the future by investing in long-term capabilities to prevent disruption.

What about the values that are so important for the DNA of a family company – are they still an advantage, or can they become a hindering block?

Values can translate into a sense of mission and purpose for the company. Instead of focusing on a revenue target, the goal embedded in values is to meet a specific consumer need. Thinking about new ways to meet that goal can be a catalyst for innovation and positive change. And for consumers today, it is increasingly important that the values of the company they buy from resonate with their own values. In the transparency of a digitally connected world, companies without a strong moral purpose are more easily outed. Therefore, the right values are perhaps even more an advantage in a changing world, not less.

Frits van Paasschen, thank you very much for your insights!